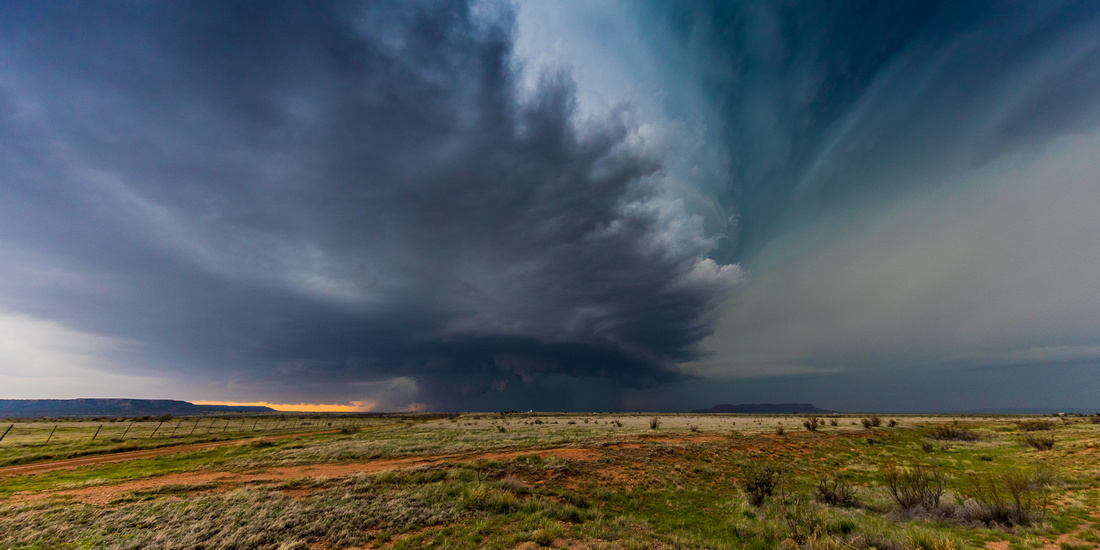 It’s late afternoon. After a hot Spring day on the plains near the Texas/New Mexico border, a menacing shadow creeps over the sun and casts an eerie darkness on the land. Churning, towering masses shoot 40,000 feet in the air, gathering strength at a rapid rate.

It’s storm season in the USA’s famed “Tornado Alley” region. As these supercell thunderstorms build and grow in ferocity, they wield incredibly destructive power. Only people that call these parts home could tell you the things these beasts are truly capable of, like hurling hailstones the size of grapefruits sideways with 100mph straight-line winds.

While we’re talking winds, we shouldn’t neglect the real reason we’re here – to witness Tornado Alley’s most monstrously beautiful production, the tornado. Most people try to get away from them. We’re hunting them. We couldn’t think of anywhere we would rather be… 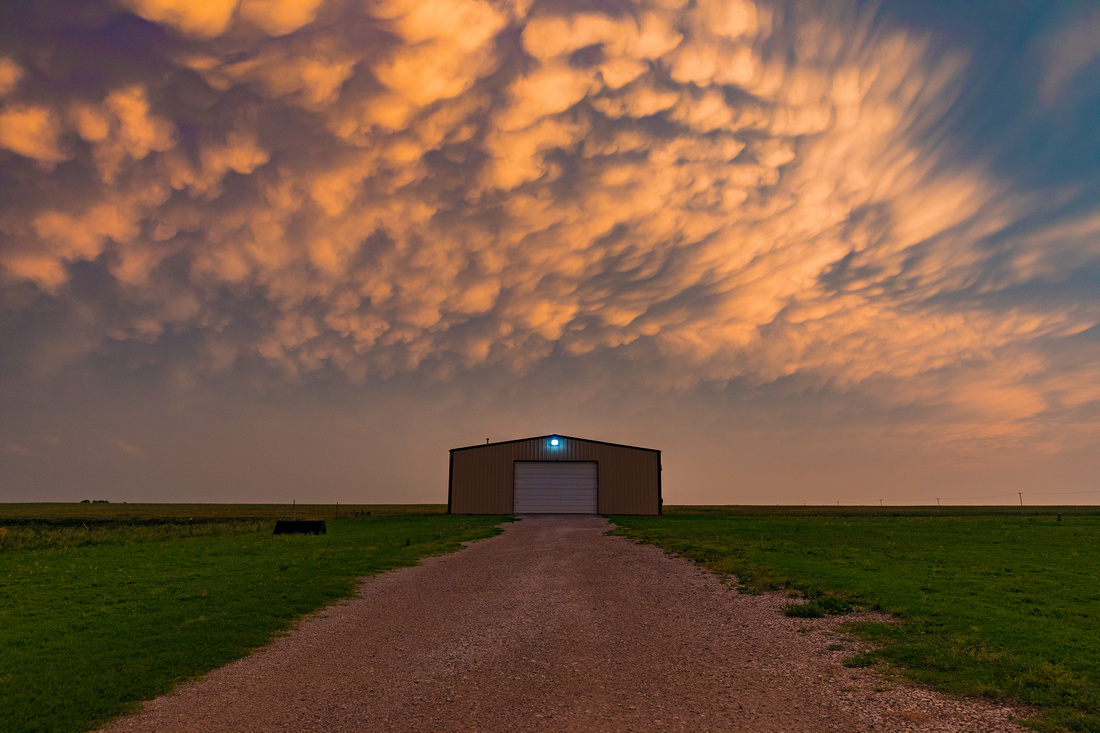 I’m over here chasing this dream with fellow photographer and idiot (I mean that in the nicest way possible) Anna Gottlieb aka Fox Cottage Photography. We’ve both been weather and storm obsessed since we were kids, and I can guarantee you that the fascination began well before the movie “Twister” came out (seriously, that’s the first question people ask when you tell them you’re a storm nut).

I distinctly remember seeking out B grade storm movies from a very young age, and scouring through the Reader’s Digests at the doctors surgery in the hope that there would be a story about tornadoes. I remember writing essays and talks on how tornadoes form in primary school. I remember writing short fictional stories about people being terrorised by them.

It didn’t stop after primary school – in fact, it got worse. My wonderful late Nana always had the Australian Bureau of Meteorology weather calendar (which, ironically is this month featuring my shot of lenticular clouds over Lord Howe) – and I would study it feverishly every time I went over to her house. 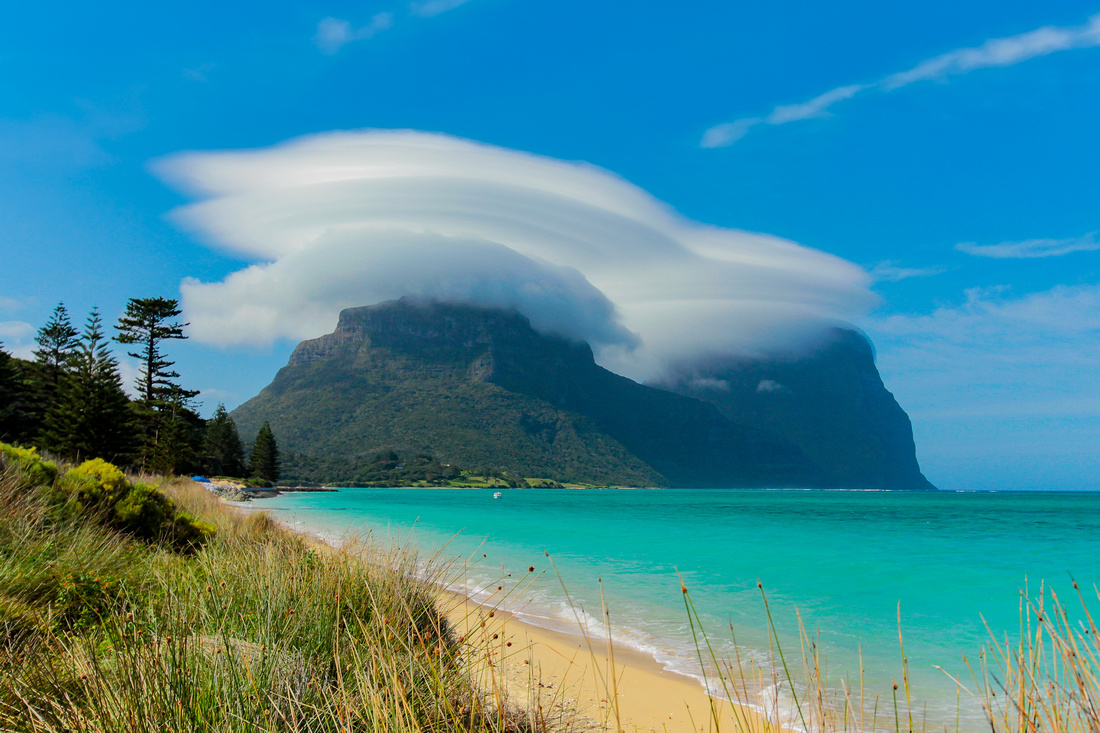 Finding photography as a passion later on in life finally gave me an outlet to communicate my love of all things weather in a way that’s not boring my friends at parties, or boring girls on dates by pointing at the sky and reeling off some random scientific cloud name.

Heading to the USA to photograph the biggest and baddest storms on the planet was something that simply had to happen. I mean yeah, we get storms here in Melbourne, sure, but seriously – this stuff is next level.

And it did not disappoint. Not one little bit. We got what we came for, and a whole lot more. Our storm chase with Extreme Tornado Tours and 9 other like-minded crazies saw us crossing 3 states over 10 days, and bearing witness to some of the most spectacular weather we have ever seen. 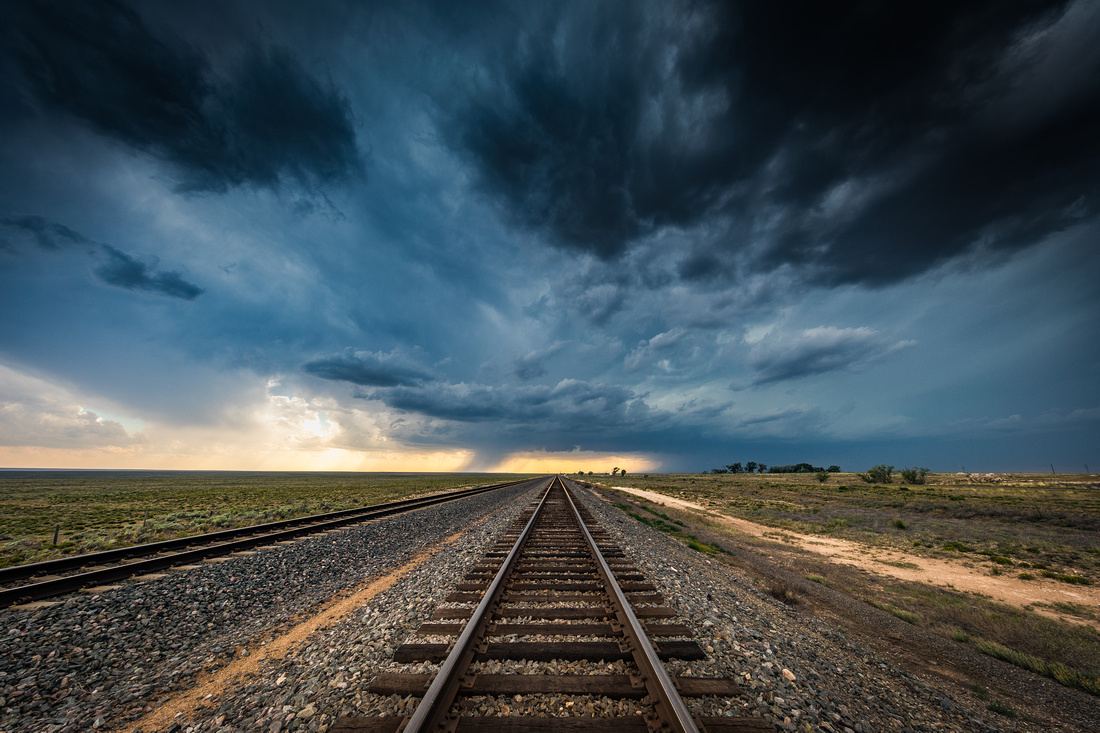 Our first chase day started in Oklahoma City, crossing through the top of the Texas panhandle and all the way to just south of Tucumcari, New Mexico. It was there we watched an isolated storm stall over a canyon and grow into a fire-breathing monster, its base rotating ominously beneath an incredible corkscrew updraft towering 40,000 feet into the sky.

We saw a lightning strike set fire to a field a few miles away, and then watched as the storm cycled over and over again, becoming even more beautiful as the afternoon passed. It produced a number of funnel clouds that didn’t quite touch down as well as 2 confirmed tornadoes, 1 of which we caught a glimpse of in the distance.

As darkness fell, the storm kicked it up a notch and produced a lightning display like nothing we had ever seen before. With almost no gaps in between, lightning strikes arced out from the core of the storm like frantic spider webs, illuminating the still rotating updraft well into the night. Incredible. I actually got goosebumps writing that, just thinking about it. 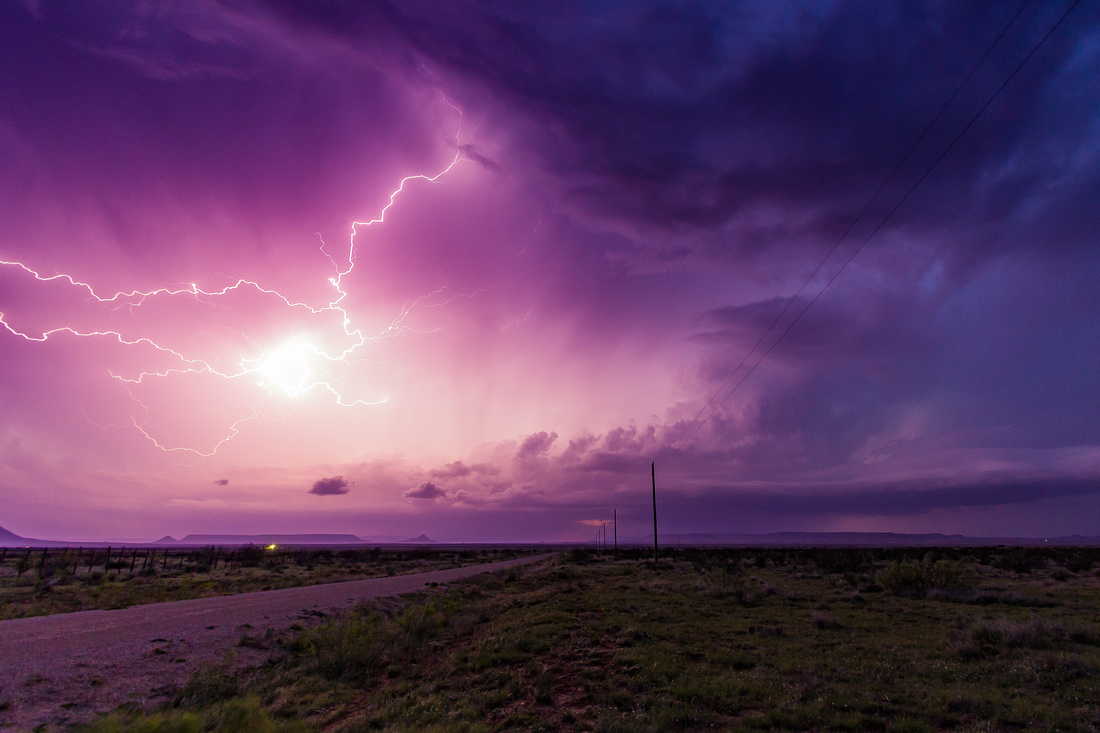 Over the next few days the action was non-stop. It was incredible watching storms grow from initiation – some just beginning as humble little cotton ball-like cumulus clouds before conditions allowed them to sprout straight up – through their stages of development into supercells, becoming severe warned, and then tornado warned as radar detects rotation within their structure.

One such storm near Sudan in Texas dropped 2 brief tornadoes right in front of us, but even without tornadoes on the ground, the cloud structure was jaw-dropping and the power of these beasts was undeniable. Watching the entire base of a storm cloud, hanging low to the ground and spinning fast right in front of your eyes, with an eerie aqua green hail core looming above, is simply an unforgettable feeling of awe. 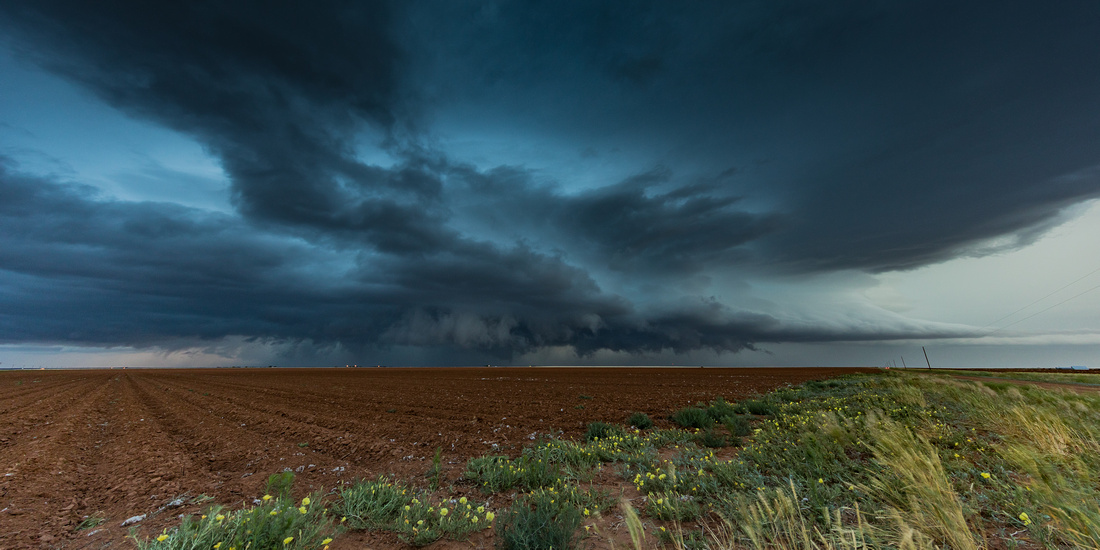 Whilst we had a few small and/or distant tornadoes on the board, it wasn’t until day 4 that we witnessed the true beauty of a fully-fledged tornado. We watched the funnel drop from the base of the cloud, making a few failed attempts to touch down before condensing completely.

Watching it from its inception in the cloud to the point where it was there on the ground, sucking up dirt from the field with incredible force, was just mind-blowing. At one point it even developed another satellite “sister” funnel that moved around the main area of rotation but wasn’t able to complete its formation.

We drove alongside it for a while with no safe spots to pull over, and sadly by the time we were able to stop it had somewhat disappeared into the rain band that was wrapping around it. Rain-wrapped tornadoes pose huge hazards, and this storm sadly went on to produce another larger tornado that was completely concealed by rain and went on to destroy parts of a nearby town, and take a life.

Storm chasing is dangerous stuff, and getting yourself in a good spot to get the right shot is extremely risky business. More often than not, you don’t have a lot of time, and need to be thinking more about your next move than you are about your current one. Our guides from ETT were beyond exceptional – they nailed it every time. Not just in deciding which storms were the right ones to chase, but positioning us based on how the storms were behaving, as it happened, and knowing where their escape roads were (and what they were made of – you don’t want to be bogged in mud with a storm throwing baseball sized hail at you).

Whilst getting up close and personal with tornadoes is an adrenaline pumping experience, some of the most stunning views of these storms are seen further back from the action. The structure of a supercell is a sight to behold, and features like a wall cloud, updraft, inflow tail, hail core, anvil and mammatus clouds all provide mesmerising views and brilliant photographic subjects. 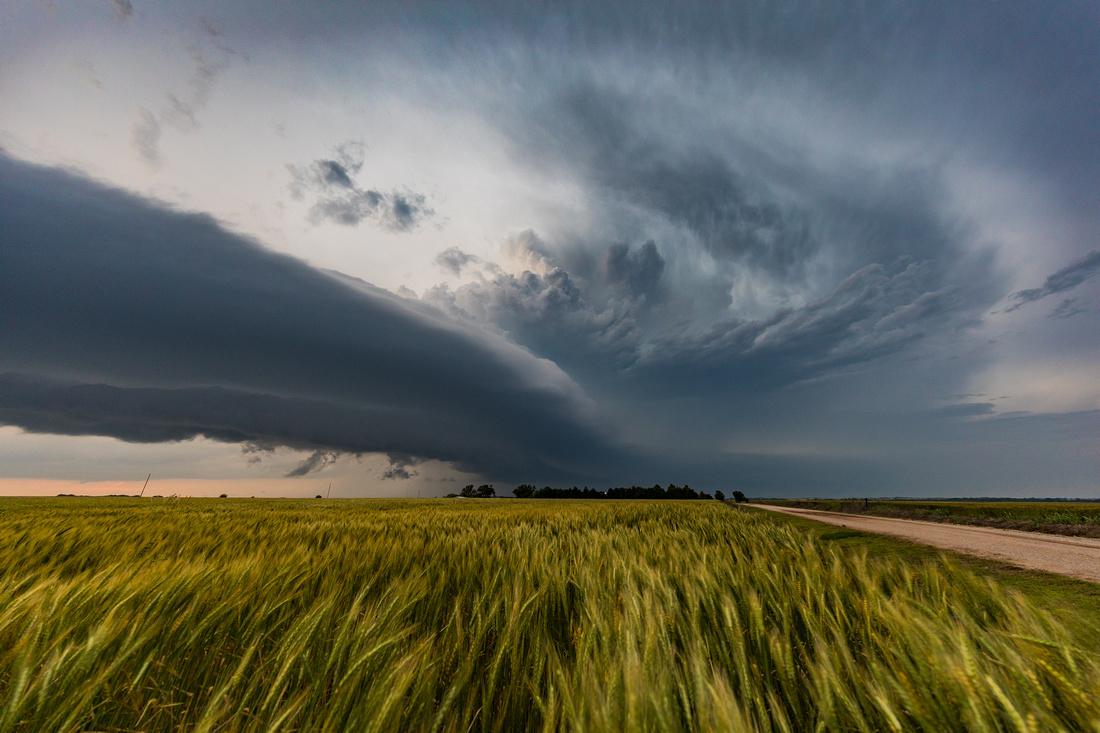 This epic adventure has barely scratched that “weather nerd” itch for either of us. It has served to make that passion for severe weather, and weather photography in general, just that much stronger. We learnt so much about photography in these types of conditions, as well as invaluable information about storm behaviour and forecasting.

We survived being caught in the “bear cage”, we “core-punched”, we got rocked by a “gustnado”, and we watched the “whale’s mouth” billow overhead as an ominous shelf cloud passed. We marvelled at the beautifully intense blue/green hues of a hail core, and we even heard the scary crackling/rumbling sound created when large hailstones smash against each other inside a cloud, known as a “hail roar”.

This is an experience I will never forget, and I’m glad I got to enjoy it with such a great bunch of people. I’m pretty sure I speak on Anna’s behalf when I say, “we ain’t done yet”… Next year, when storm season rolls around in the USA again, you’ll know where to find us. 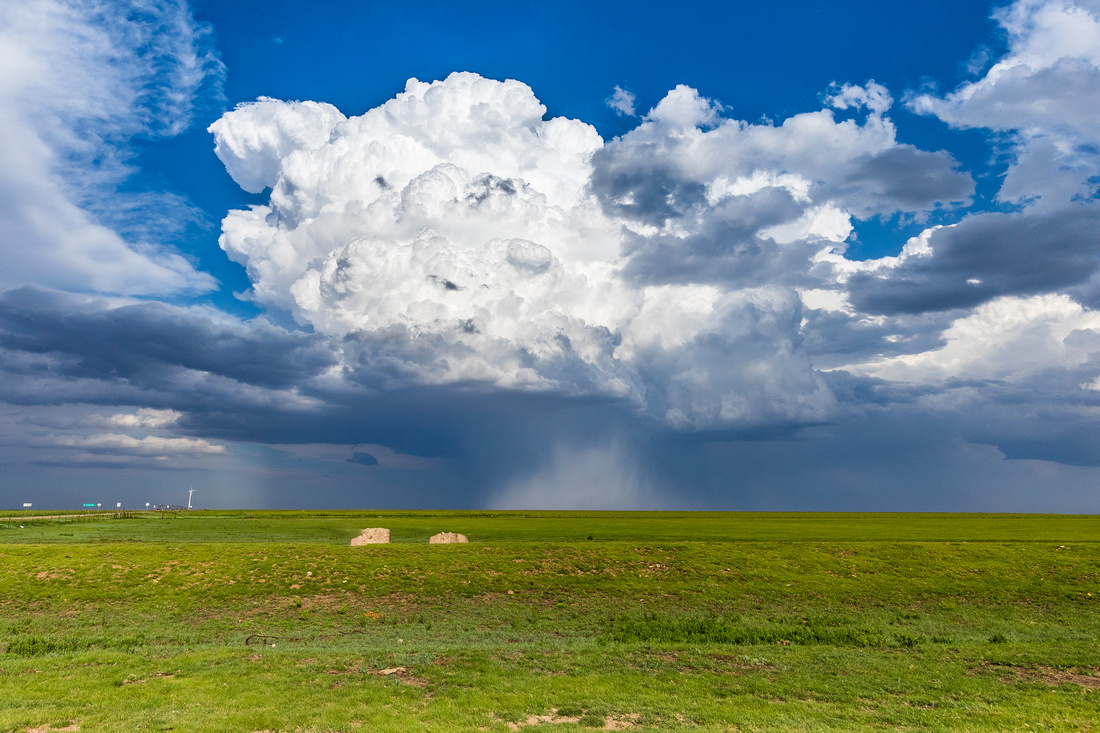 A huge thanks to:

Extreme Tornado Tours (you guys seriously rock), the other awesome chasers we met over there, Benro Australia tripods, and Canon Australia for the use of Canon 5DMkIV and Canon 5DsR bodies, and EF 11-24mm and EF 16-35mm lenses. And of course to Anna, and the rest of our chase crew, for being both hilarious and awesome.

I’d love to hear your thoughts on this story, and feel free to ask questions if you’re interested in knowing more about storm chasing.

Finally, here’s my timelapse made up of about 5,000+ still images from the trip – please go full screen, watch in HD, and watch until the end (trust me)…