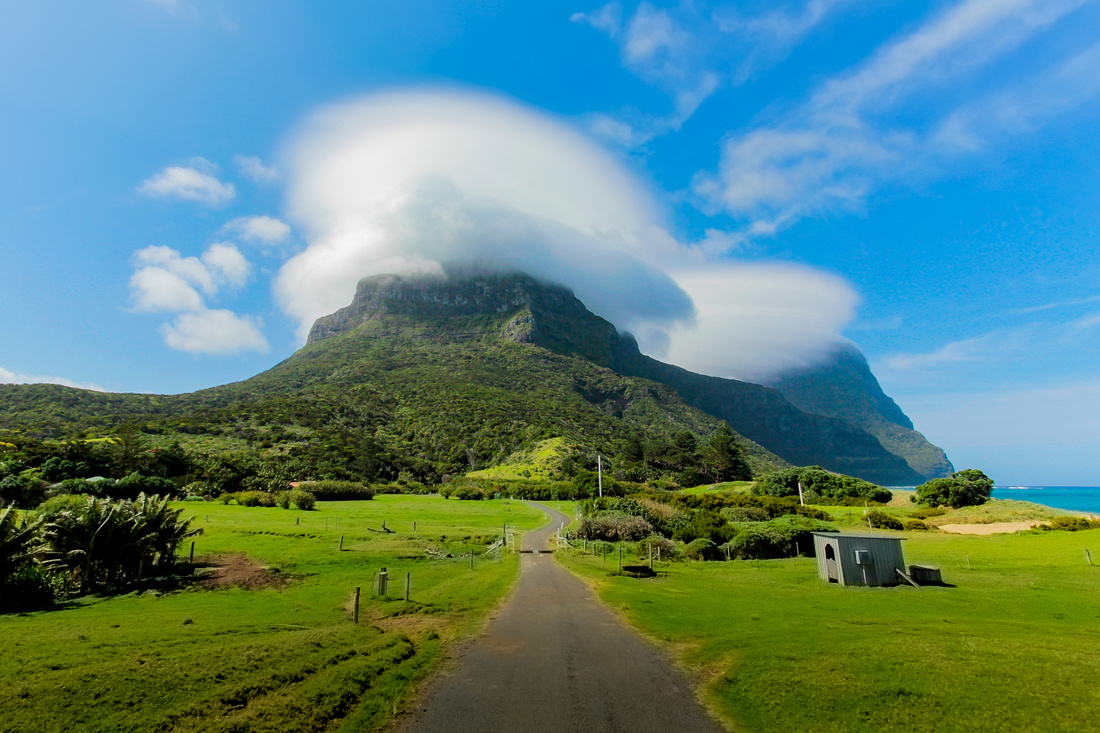 “Keep awake, while you may, in mountain mansions so rare”

– John Muir (if you don't know about this guy, and love the outdoors, you should definitely jump on Google)

The 14km Mt Gower trek is an adventure that will stick with you long after you have left this island paradise. It’s as tough as it is rewarding, and taking in the incredible view of one of Australia’s most stunning locations from 875m is simply mind-blowing.

The twin peaks of Lidgbird and Gower dominate your view to the South from most places around the island – goliaths that create their own weather, with a sense of mystique and awe that feels as though you’re watching a scene from Jurassic Park.

The trek itself is graded medium to hard, and you’ll experience sections of rope-assisted climbing, scrambling through rainforest mazes, sheer drop-offs and of course, incredible views. The island board dictates that you need to head up with a licensed guide, and there’s a good reason for this – unless you know exactly where you’re going, it’s very easy to miss a mark and lose yourself. 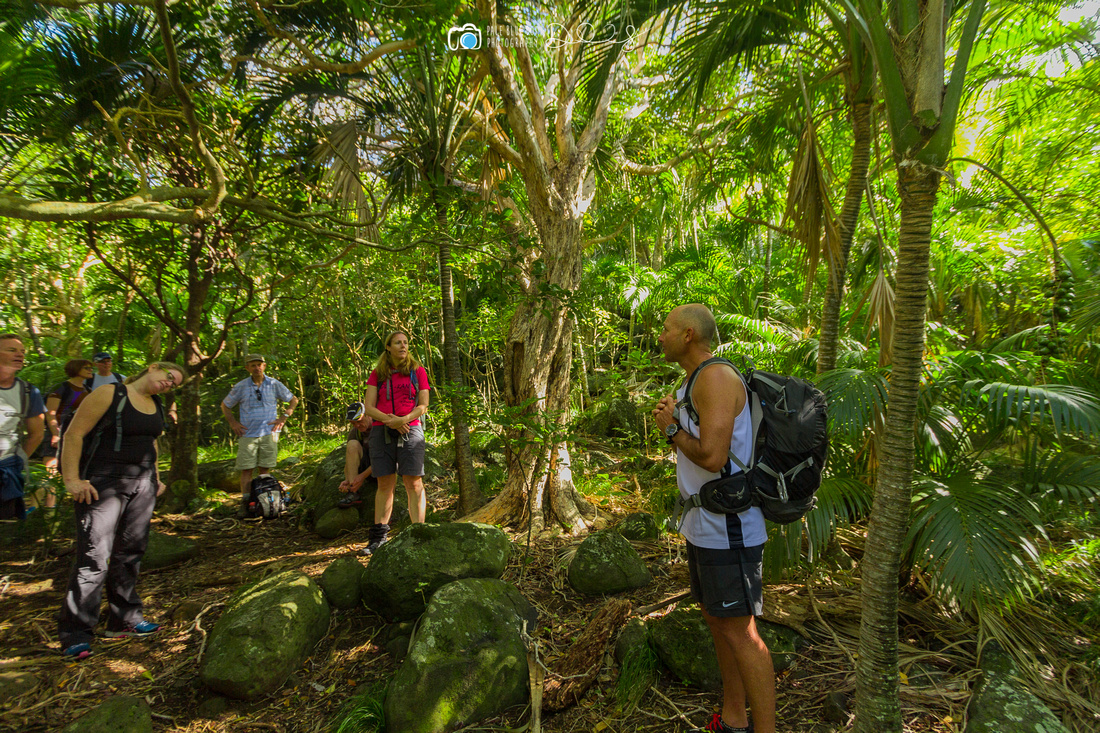 The benefits of using a seasoned guide of course extend far beyond the possibility of getting lost – you’ll return armed with some awesome knowledge on the island’s flora, fauna and history. I’ve been up twice now, both times with naturalist Dean Hiscox (or “Ocker” as the locals know him) from Lord Howe Island Environmental Tours. Ocker served as Lord Howe Island Ranger for 16 years, and has been instrumental in the development and maintenance of the trek. If there’s a question that he can’t answer for you about the island, you get your trek for free (disclaimer – that comment was not in any way endorsed by LHIET – sorry Ock).

OK – on to the trek itself… After a briefing, you start off with a nice gentle walk towards Little Island, where you can take in the imposing behemoths ahead of you in the morning light. You’ll scramble over a rocky beach in the shade of Lidgbird, until you come across a barely noticeable entrance into the jungle. This is where it really begins. From here, you go UP. 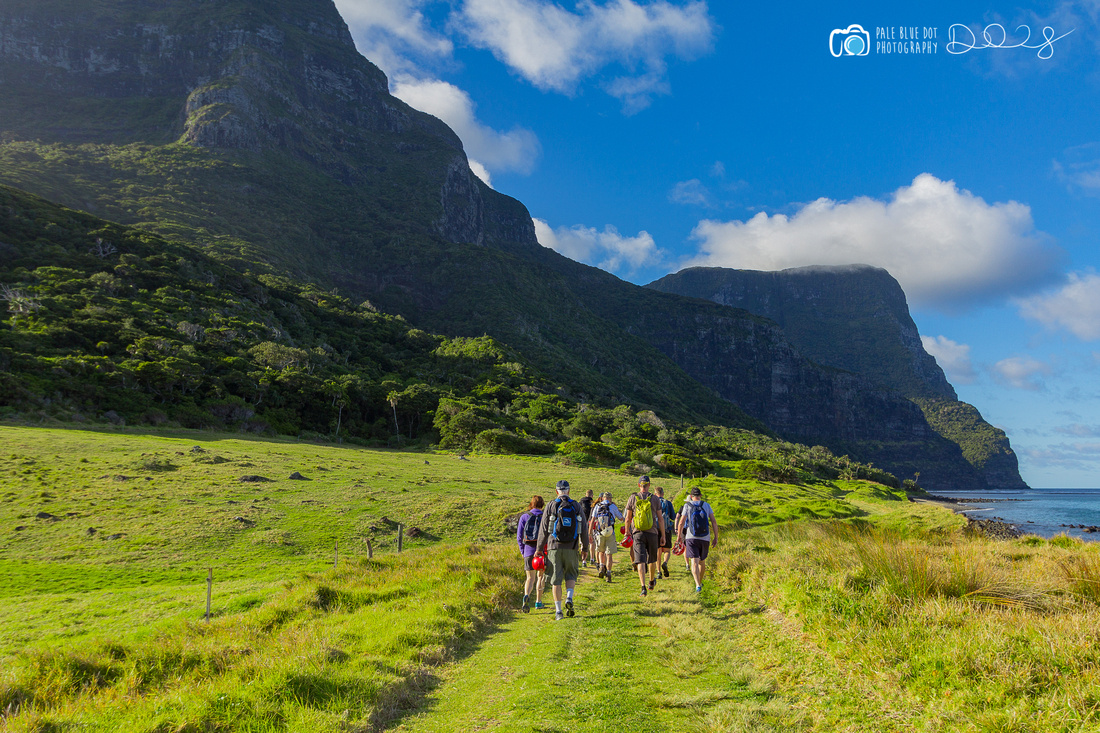 The first rope-assisted climb through the jungle is near vertical, and tough, but a great exercise in conditioning you for the rest of the adventure. Heart pounding, you’ll get a chance to catch your breath beneath the kentia palms and towering granite walls of Mt Lidgbird, at the entrance to the section known as the Lower Road.

The Lower Road is a narrow stretch of the track that sees you traversing Lidgbird, with vertical cliffs to your left, and a sheer 100m+ drop to the crashing waves on your right. Put plainly, it’s awesome. And a tad scary – if you’re any bit afraid of heights. You’ve got ropes to hold on to against the cliff, and the path is wide enough, but that drop to the right is daunting to say the least! 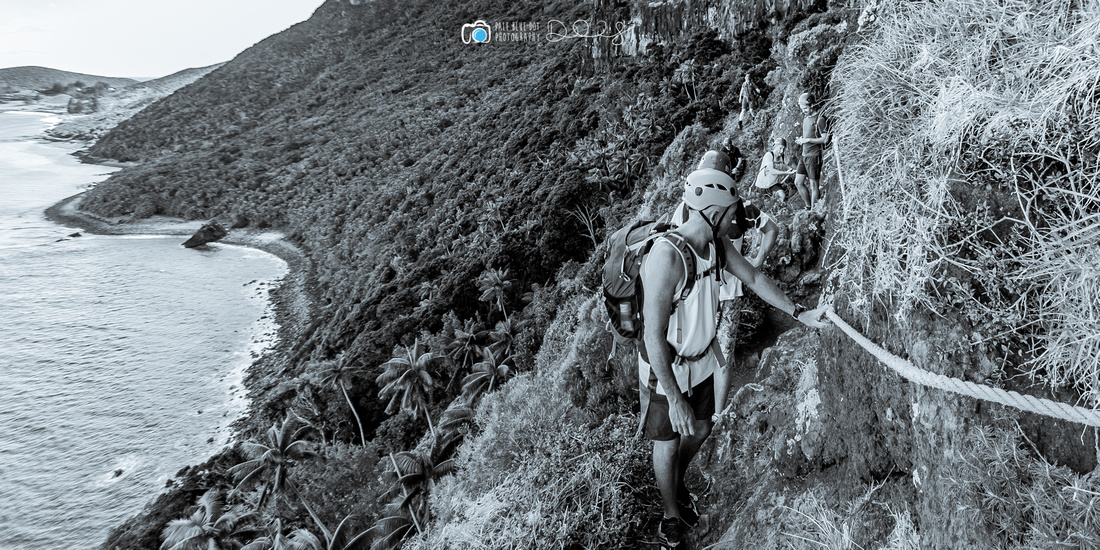 From there it’s back into the forest as you make your way around the southern face of Lidgbird and into the Erskine Valley, that separates the twin towers. You can enjoy a nice view up to the summit of Gower before immersing yourself in the jungle again. This part of the trek is a fairly mild ascent compared to the rest, and there’s plenty to learn about this amazing forest ecosystem along the way to the rest stop at Erskine Creek.

And then, after a quick recharge by the usually gently flowing creek it’s up. Up, up, and then some more up. But boy is it worth it once you emerge from beneath the canopy to gaze across the saddle that separates Lidgbird and Gower. This is your first “no words needed” moment, and if you’ve got any breath left from the taxing ascent, then the view will quickly take it away. 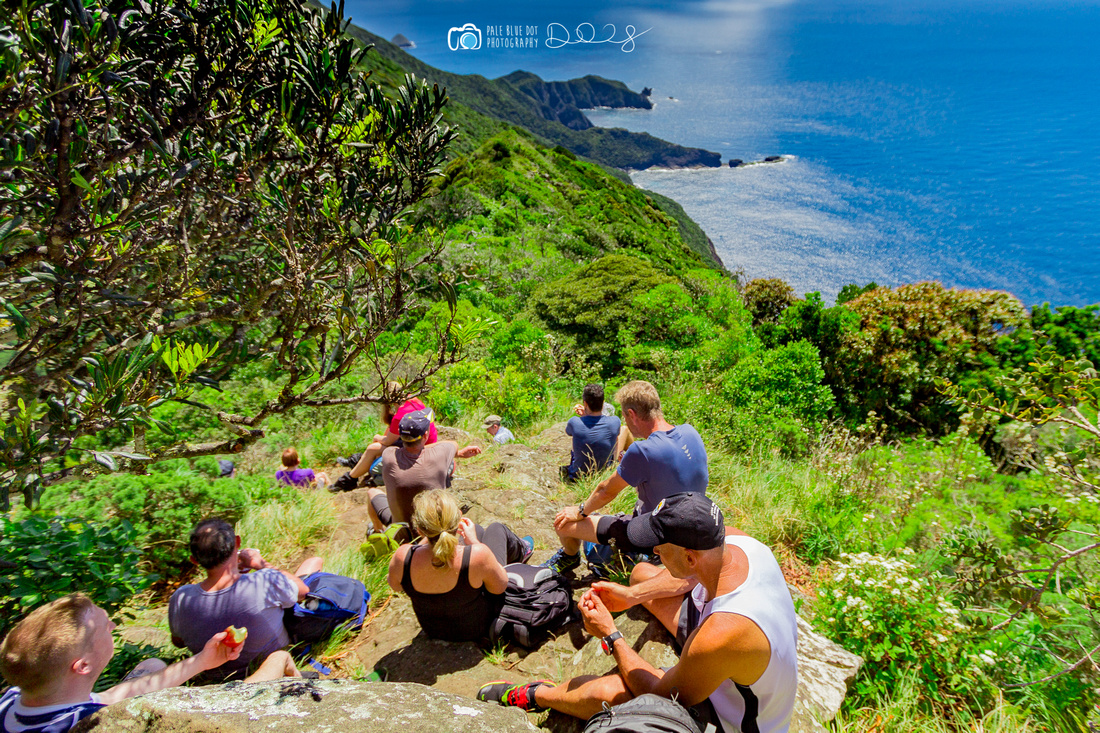 In front of you, you have the somewhat odd shape of Lidgbird, surrounded by a dense carpet of lush green treetops – and surrounding that, the great big blue. The colours of Lord Howe are kind of hard to describe accurately. That blue is just so damn blue it hurts. It’s an assault on the senses.

If you’re not grinning ear to ear by now, you’re in the wrong place – and besides, it actually gets even better from here on. Energised by the visual reward of your achievements, the next part of the climb is tough with many rope-assisted scrambles, but somehow it doesn’t feel so bad with the scene you just witnessed etched firmly in your mind’s eye. 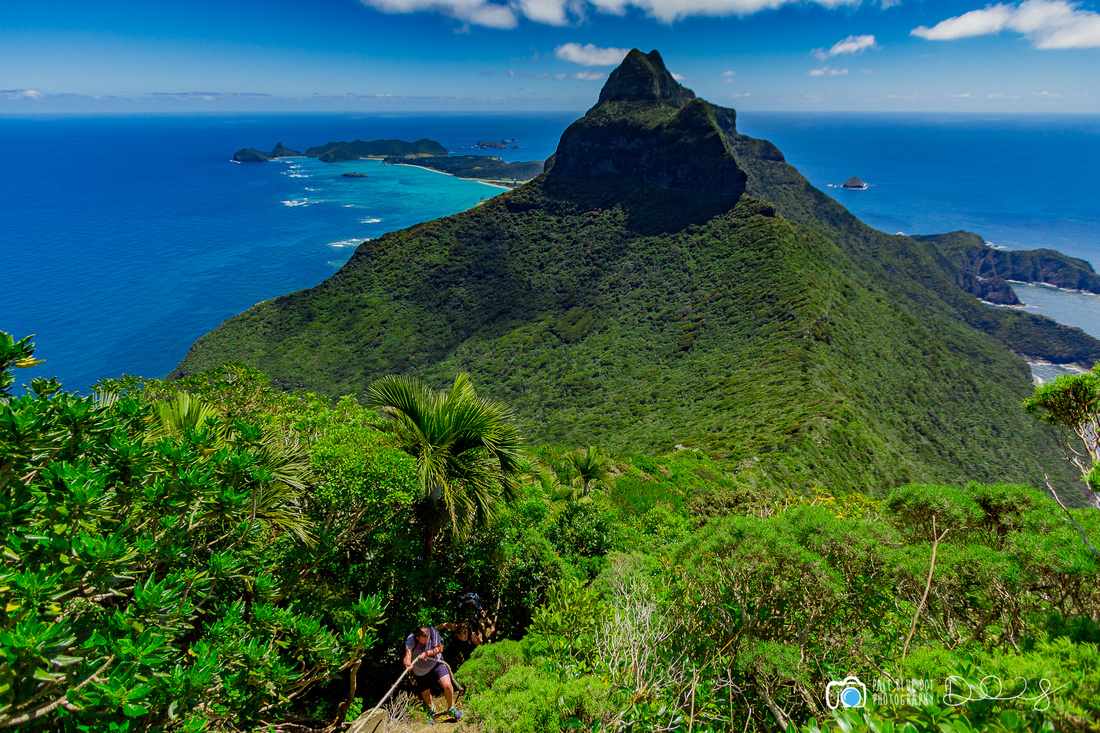 The next viewpoint, and another chance to take a rest, is affectionately called “The Get Up Place”. I mean, that’s pretty much what you do there – there’s another steep rock scramble, and all of a sudden you’re in the open with another incredible vista to feast your lucky eyes on. From here you can start to see the lagoon peeking at you from behind Lidgbird – where the azure water turns to turquoise – and if you’re lucky, you might be able to see the incredible Balls Pyramid jutting from the ocean 23kms away on the other side.

Behind and above you looms the flat-top peak of Gower, and it feels oh so within reach… It is. Important to note that from the saddle to the peak is only about 1km of actual walking, but takes in more than half of your altitude gain. Thankfully, here you use your arms a lot as well with ropes and plenty of hand-holds. 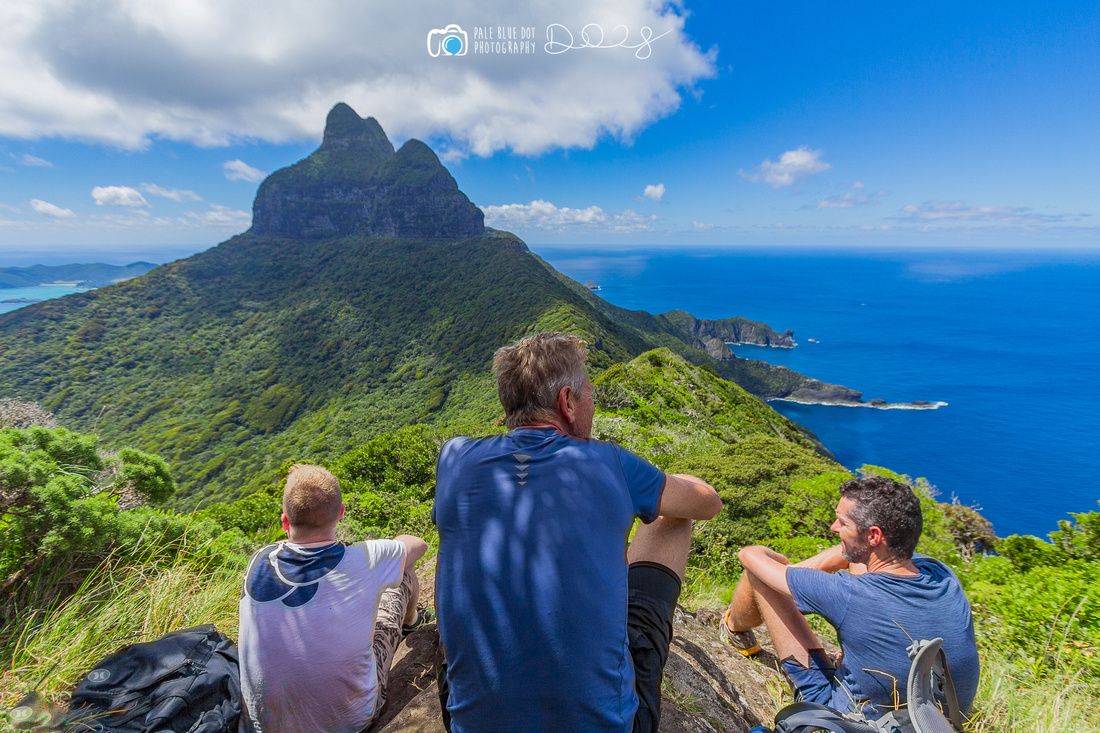 And then it changes, quite suddenly… You’re in the “Cloud Forest”, and you’re no longer going up… This part of the trek is like stepping into another world. Have you died somewhere on the ascent, and is this soft-underfoot, lush, misty, moss-laden garden your first view of heaven…? 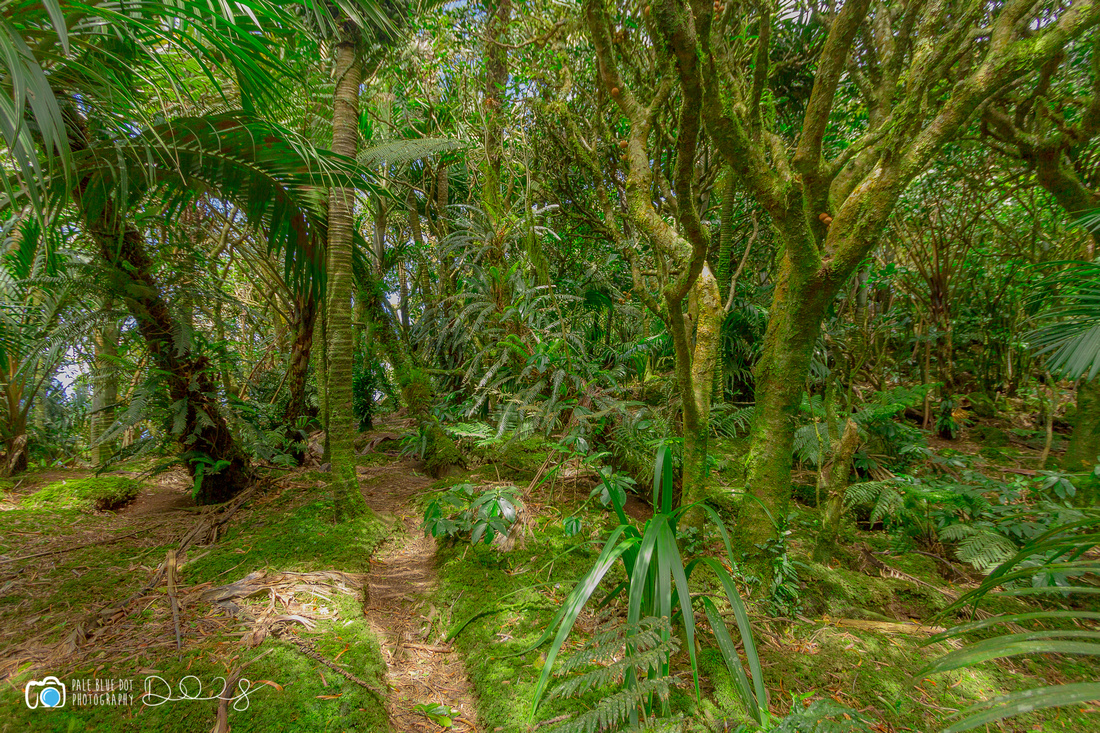 Fortunately, you are still very much alive, and you’re on top of Mt Gower. You enjoy a lovely little stroll through the forest, under the watchful eye of the resident Lord Howe Island Woodhens, and then BAM. Unless you’re in the clouds (which can happen quite often up here, and is the reason behind the “Cloud Forest” name), you will be looking at one of the most stunning views you’ve ever seen.

Below you, Lord Howe Island, in all of its stunning glory, surrounded by the Tasman Sea. Sit down, take it all in, have a drink and feel damn good about what you have just done. But don’t be complacent, as the Lord Howe Island Currawongs (a LHI endemic version of our mainland Pied Currawongs) have followed you up. They picked up your trail on the saddle, and have shadowed you ever since. They want your lunch, and if you take your eyes off them because you’re too busy snapping pics, they WILL take it. 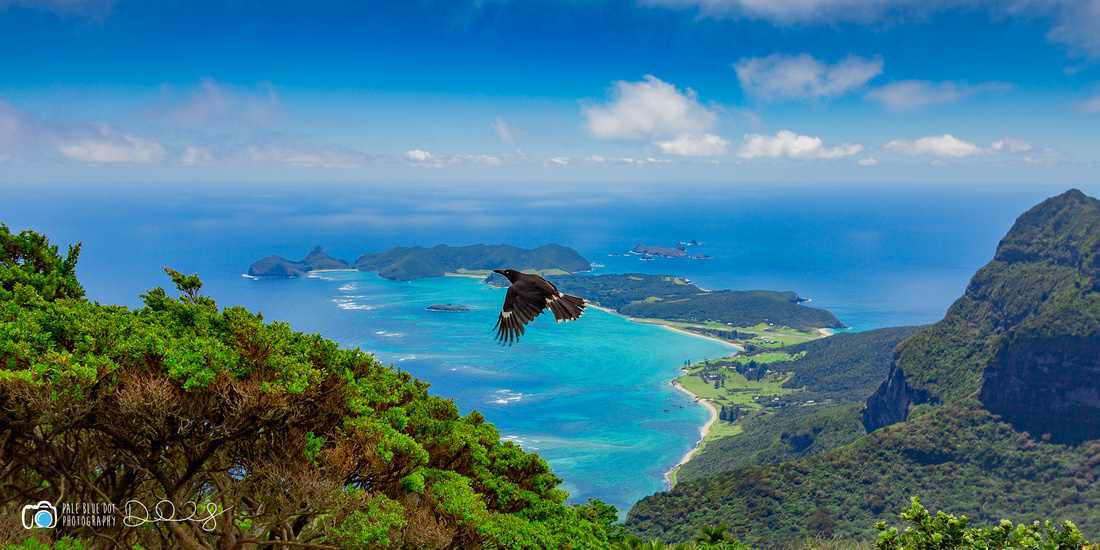 The Currawongs do make an incredible foreground interest, and as a bird-lover, this is actually up there with my favourite shots ever taken. That view… seriously. I’ve been up Gower twice now, and both times I have been lucky enough to have clear skies, with cloud just overhead.

After spending about half an hour up top, you’ll begin the downward journey via the same path. Your legs will be burning, so take extra care in choosing where you drop your feet on the steep parts. Keep a hand ready to steady yourself, should you slip or stumble. Whilst the tough ascent is behind you, getting down is still no easy feat – especially after the strength you will have sapped going up.

The trek ends as it begun, with a nice gentle stroll. You look up at what you just conquered with a huge grin and a shake of your head as you chat away with the rest of your group. This adventure will stick with you for life – and you’ll struggle to put to words exactly what it was like when people ask you. I’ve given it my best shot here, but this is one of those things where words just don’t come close.

A huge thanks to Lord Howe Island Environmental Tours for having me on the trek – and to Dean and his extended family for always making my Lord Howe Island experience so wonderful. If you’ve got questions about Lord Howe or the Mt Gower trek, hit me up – and please feel free to leave me a comment. 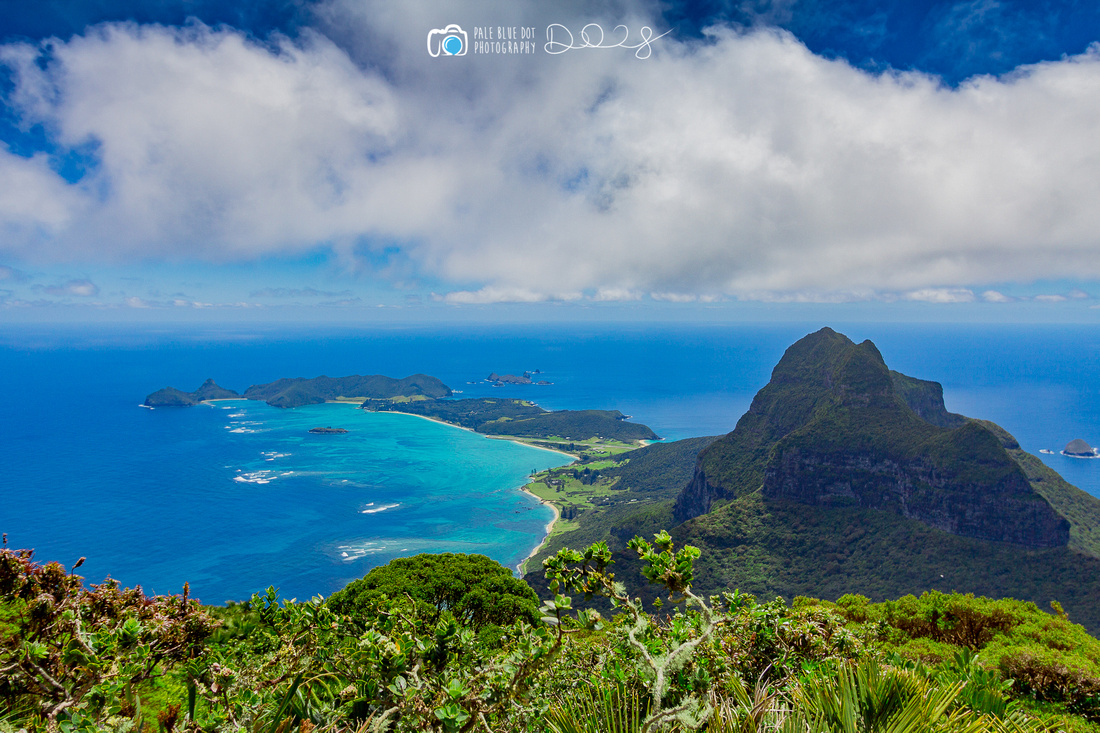